Confession time, again…I know there are all sorts of nifty cast offs out there…extra stretchy, extra fast, extra (substitute the latest thing here), but I just seem to come back to the regular old “knit 2, pass first stitch over the second stitch” cast off. I know, boring…but I haven’t had any trouble with this tried and true method. so why change. I have started giving the first and second stitch a gentle tug to enlarge them before the passing over bit...making the cast off not so tight, but generally, it is the same cast off I learned at age eight.

Wilkins. Beginning of round where ends were woven in.

Weaving in the Ends

We talked about some of this in Post 10 - “Weaving yarns…to add new colors and finish old colors”, but I wanted to talk about weaving in the ends a bit more depth here…mostly because I said I would.

If you ask a group of non-stranded knitting folks why they are reluctant to try stranded knitting, you will get a variety of answers. Among them is the necessity of weaving in “all of those ends”! This statement is usually accompanied by a look of abhorrence. Hey…I sometimes get this reaction from stranded knitting enthusiasts!

There are people out there that count how many ends they have to weave in …giving them numerical milestones to reach as they go and a label to their feeling of accomplishment when finished. "I had to weave in 468 ends!"

There are those who kind of enjoy the process of taking care of the ends. At the completion of the knitting, they settle in with a good movie or a book to listen to and work patiently securing those ends. "It's very Zen-like."

I have a friend who spreads out the “joy”. She works for a few inches on a stranded project and then stops and weaves in all of the ends not secured up to that point. That way when the project is finished the ends are all done with.

There are some among you who weave in the ends as you go…as we discussed in the previously mentioned post...for the express purpose of not having to weave them in at the end.

What do I do? For no other reason that being overly cautious, I both weave in the ends as I go AND weave them in during finishing. I know, overkill.

So if you would rather not weave as you knit….and are an exclusive weaver of ends at the finish …or a combination “weave as you knit” and “weave at the end” person, as I am, there are a few options for getting those ends secured.

Examples of weaving in ends for non-stranded knitting generally use cast on and/or cast off ends for demonstration. The knitter is instructed to thread a tapestry needle and on the reverse side, follow a few stitches…doing a kind of reverse side duplicate stitch with the end. This is supposed to maintain the overall stretchiness of the finished fabric.

I have also seen an instruction to make sure to work in diagonal lines when securing the end.

These techniques are designed to prevent the ends from coming unraveled during the normal wear of a stretchy fabric.

Good News! Stranded work is not that stretchy…so the fear of unraveling is a somewhat lessened.

What I do is…gently tug on the end to tighten up the stitches and to determine which direction the end is coming from. Then weave in the end…going under a few purl bumps and around a few floats…for about 2 inches, continuing in the direction the end was traveling.

Wilkins. Beginning for round (body), wrong side showing woven ends.

Wilkins. Beginning of round (rib) showing woven ends. Now, how do you direct the end on your chosen path? Here are a few suggestions…

Blunt tapestry needle with 4-6 inch tail. Thread it up and go. It’s a bit tedious, but works well.

Blunt tapestry needle with 1-3 inch tail. Without threading it, take the needle on the desired path, hold tight while you thread the needle, and then pull through. This is a bit fiddley, but helps when the tail is too short to thread the needle conventionally.

Crochet hook with 2-3 inch tail. Pull the end through 2 or 3 chosen locations along the path. FYI, I generally try to pull the end from the same direction…either the bottom or from the top of the purl bump (or float) that is used as the anchor spot. I find the direction consistency causes the end to spiral along its path of security…becoming a bit more…well…secure.

Ok, so there you go…a few ways to secure ends. As always…not a decree of what’s right or correct, just a few ideas for you perusal. If you have a method that works for you, by all means, stick with it. “Why fix what ain’t broke”?

Next time - last post in this series: Blocking. I'm be asking what series people would like to see next. If you have enjoyed this one, let me know what you would be interested in as it pertains to stranded knitting. Best! 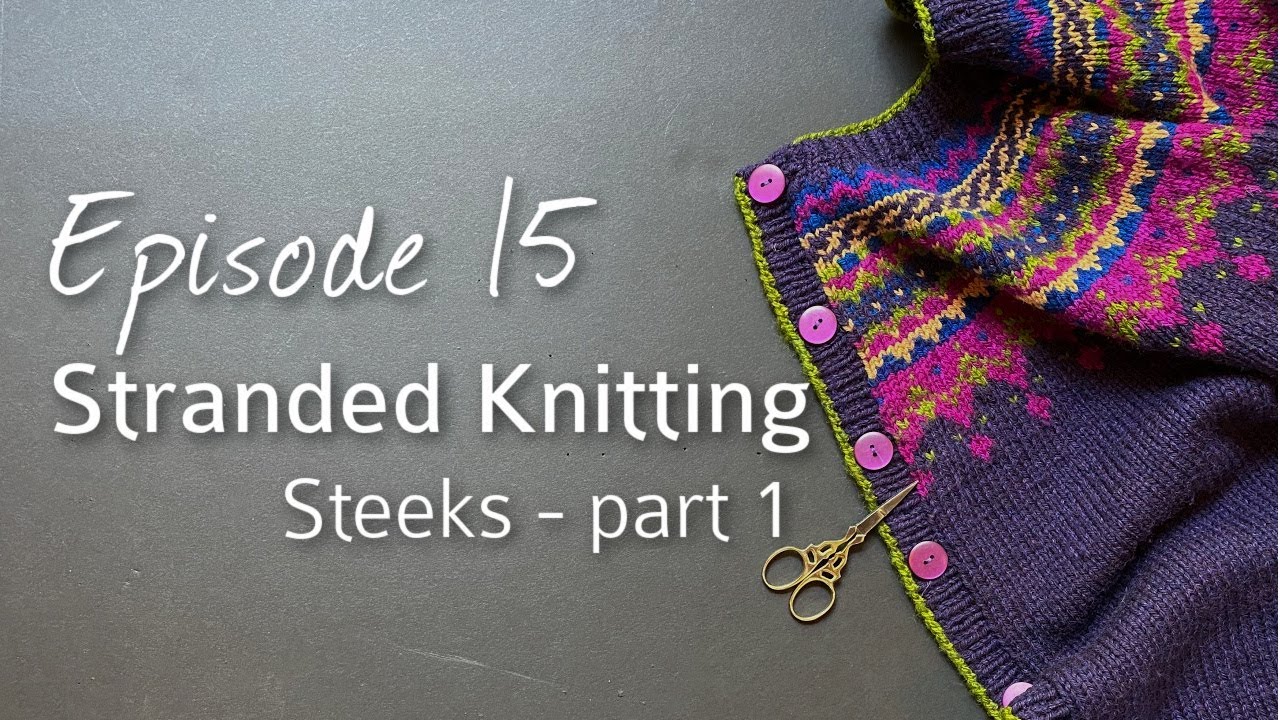